Procrastination vs. Productivity: What Does The Future of Work Look Like? 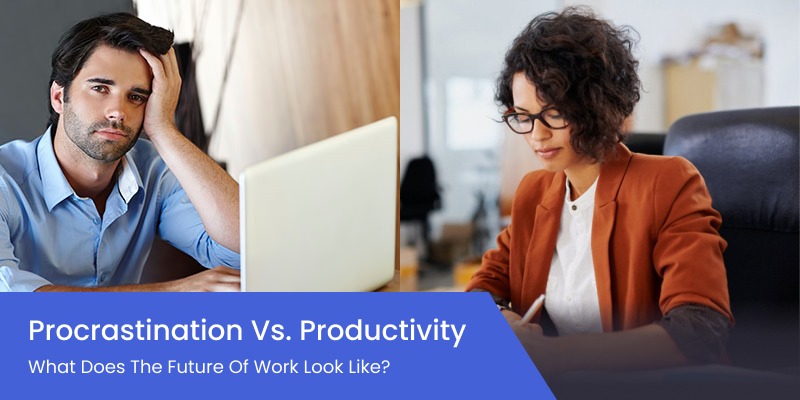 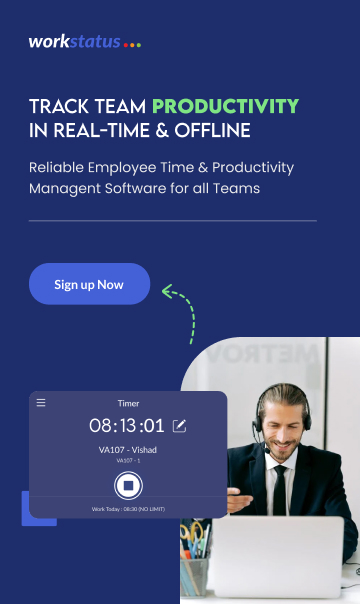 We are here today to talk about something that affects us all: procrastination. We’ve all been there—you know, when you have a big project due tomorrow, but instead of working on it, you find yourself scrolling through Facebook or watching Netflix instead? Well, let us tell you that it’s not worth it.

The future of work looks bright if you’re willing to put in the effort. You must learn to manage your time effectively to get everything done without feeling overwhelmed or stressed by deadlines looming over your head.

The first step is admitting that you have a problem with procrastination; once you do that, we can work together to find solutions for overcoming this issue so that you can live a more fulfilling life without having all this extra stress weighing down on you constantly.

Read the blog to know the top strategies to overcome procrastination and become more productive.

How Do You Define Procrastination?  Is it the ‘art’ of not doing things?

It’s easy to procrastinate because so many other things are vying for your attention: email, social media, Netflix, etc. But in the long run, procrastinating will make life harder because you’ll have less time to get things done! If you want to succeed in life, you need to learn how to overcome your tendency toward procrastination to get everything done on time.

Let’s find out why people procrastinate, the most common reasons for delays, and then explore some strategies to overcome this evil.

Why Do People Procrastinate?

We all procrastinate sometimes, but there are seven key reasons people do it more than others.

This list might not be all-inclusive, but it might contain the answer you’re looking for. These reasons are valid, so long as they aren’t commonly used as excuses.

Avoiding a task because it’s difficult or challenging can quickly turn into habits that lead to lower productivity. You need to take care of the problems at hand and address them head-on so you can accomplish what needs to be done.

Some Famous Procrastinators You Don’t Know

His vice-president has described Bill Clinton ( Ex-President of the United States) Al Gore as punctually challenged and by Time magazine as a chronic procrastinators.

Furthermore, Time Magazine disclosed that he would often engage in “harrowing last-minute cut-and-paste sessions,” which has also been noted by many other officials.

J.K. Rowling, a famous English author, is well-known for having written the Harry Potter series. She had often spoken out about her tendency to procrastinate, such as when she said on social media that she was “rather good” at it.

She also shared similar sentiments:  “You can waste a lot of time on a plan while feeling vaguely productive.” One interview stated that she often spent evenings wandering around the house and procrastinating.

Steve Jobs was an American businessman who served as the creator and CEO of Apple Inc. Several of his collaborators reported that he would continuously put off work because he never wanted to do something right away.

Margaret Atwood (Canadian writer) has written popular fiction like The Handmaid’s Tale. In addition to her writing career, Margaret shares insights on procrastination with listeners of this podcast hosted by Adam Grant.

Furthermore, she stated that despite her chronic procrastination, she has always been able to make her deadlines.

These are some of the famous personalities who were known for putting things off themselves and would be among those criticizing their procrastination and cautioning others from delaying.

While it is true that you can go ahead and delay your work but still be successful, this does not mean that the act of procrastinating causes people to succeed, that it does not have any drawbacks, or that it should be glorified. 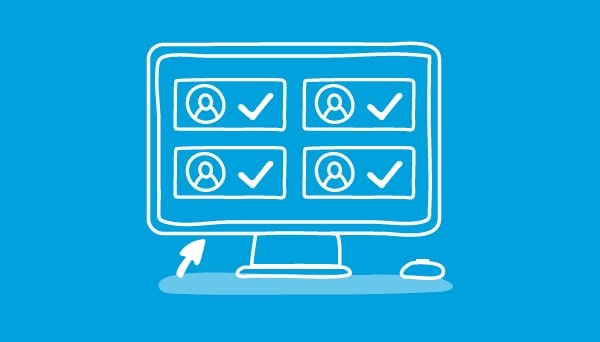 Here are some of the best strategies to overcome procrastination:

While that’s good for some projects, it doesn’t work for others. Instead of focusing on finishing your project today, think about how you can break it down into smaller mini goals. Think about activities that will bring you closer to reaching your goal.

If you want to overcome procrastination, you have to give yourself deadlines. It means setting specific dates for . Make sure these deadlines are realistic and give yourself enough time to complete the job. It will help you be on track and  feeling overwhelmed.

To overcome procrastination, it is best to break tasks into manageable steps. When a task seems overwhelming, it can be helpful to break it down into smaller goals that you can complete.

For example, if you need to write a paper, your first step might be brainstorming ideas, researching, creating an outline, and so on. By breaking the task into smaller steps, you’ll feel more motivated to get started and less likely to procrastinate.

You can also use productivity tracking software and stop procrastinating by keeping track of your daily tasks.

A great way to overcome procrastination is to make it more pleasant for yourself. Giving yourself small rewards when you complete tasks on your to-do list can keep you motivated, and making them visible will remind you of how much progress you’ve made and give your brain something nice to look at.

If you procrastinate a lot, it can be tempting to punish yourself for not finishing things when they were due—but don’t fall into that trap! These self-inflicted punishments only hurt in the long run; they rarely work and often leave you feeling frustrated or guilty. You need time to recover from mistakes, and punishing yourself just makes failure harder to face.

We’ve all heard of the saying that procrastination is the thief of time, and it’s true; if you don’t prioritize correctly, then you won’t have enough time in your day for everything that needs to get done.

There are many effective task management strategies for higher productivity and conquering procrastination. But, one of the best strategies is to tackle your most important tasks first. By focusing on one item and finishing it, you’ll know that other projects will have your full attention when they are due.

Rather than jumping from task to task, commit yourself to finish one before taking on another. You’ll feel better about your productivity at work and throughout your day.

7. Use Apps to Track your Time

In order to get rid of your procrastination, one of the best things you can do is track your time. It will help you identify patterns and see where you’re wasting the most time. There are several great time tracking apps like Workstatus out there that can help with this.

You can see what percentage of your day you spend on work-related tasks versus personal activities. You’ll also be able to set goals for yourself for the next day or week and even set alerts that remind you when it’s time to start working again.

Also read: Workstatus vs. Clockify vs. Toggl- The Ultimate Battle to become the Best App for Time Tracking

Procrastination vs. Productivity: Measure Everything With Workstatus

The most prominent challenge people have with getting things done is procrastination. It’s when you keep putting off important tasks because they’re too challenging or not interesting enough.

However, this should not be the case! With the right tools, you can stop procrastinating and get more done in less time. That’s why we built employee monitoring software like Workstatus with five key features in mind:

Workstatus provides detailed analytics so that you can see how much time you’ve spent on different projects or tasks over a day, week, or even month, depending on what interval length you choose when setting up your account.

This helps give you perspective so that instead of trying to work for 8 hours straight today, maybe it would be better to break it up into two 4-hour chunks with an hour break in between. That way, you would be able to meet your goal and have some free time at the end of the day too!

Seeing how far you are toward reaching your goals every day is motivating—it helps keep you going even when things get tricky! So, if you want to stop being lazy and get things done, try using Workstatus today.

The idle timer will let you know when you’ve been inactive for a certain amount of time (say, 15 minutes) so that you don’t go off the task for too long. It’ll track how much time you’ve spent reading emails or browsing the internet to see how much work you’ve done during the day.

You don’t want to waste time on things that don’t matter, so we ensure that everything you do gets logged automatically to see where your time goes daily.

A great way to measure procrastination vs. productivity time. Track how productive you’re being throughout the day by showing how much time has passed compared to how much time was scheduled for each activity during that time frame.

So, you can just have a glance at whether or not you’re staying on track throughout the day so that you can adjust accordingly if needed!

Plus, with its easy-to-use interface and automatic scheduling features, tracking your progress has never been this easy. If you procrastinate on a project or just can’t get started because you don’t know where to begin, try using Workstatus for a week and see how much more productive you can be!

In conclusion, the future of work is looking more and more like it will be shaped by your ability to balance the need for productivity with the need for procrastination.

By understanding when it’s appropriate to do one or the other (and when it’s not), you’ll be able to maximize your performance while minimizing stress levels!

So what does this mean for you?

It means that no matter what kind of job you have—whether it’s an office job or something else—you can use the above strategies to help make sure that you’re being as productive as possible while still taking some time for yourself along the way!

Thanks for reading and not procrastinating!!

Top 8 Employee Scheduling Software for Agencies: What Every Marketer Needs to Know

Benefits Of Having Computer Screen Monitoring Software For Your Business

Your email address will not be published. Required fields are marked *